Selling a House, Mexican Style, the Next Step

First, I’ll get the house stuff out of the way. I spent the last two weeks worried that the buyer would back out, and then she came to see me yesterday to talk about depositing a million pesos in my account. Okay! That was done today, so I guess there’s not much chance she’ll back out. The closing has been moved to the last day in February, but she hopes it will be sooner.

Next, my condo. My landlord has gone to Mexico City for Christmas with his family while the crew continues the work on the condo. They will send photos soon. I decided to go ahead with my trip to the Yucatán peninsula, and we came up with a February 1st move-in date.

My next step is to try to arrange hotels and a flight, which I’ll do as soon as I finish this. I’m hoping for this Friday. I’ll take you all along with a post for each town I visit. I’m not really planning too much because I want to be able to stay in a place or move on depending on how much I like it there. I will start at Bacalar, just north of the Belize border and then head north from there.

I plan to return to Chapala about January 20, pack up the rest of my stuff (it will fit in my car) and drive to Barra de Navidad so I can pay the property tax and water bill down there. After spending a few days with Terry, I will drive to Puerto Vallarta while he returns to Chapala and then to Florida. Of course, all of this is subject to change if the Barra house, which has been on the market since June, sells.

Now for the fun part - my trip to Chiapas. We flew from Guadalajara to Tuxtla Gutiérrez, Chiapas, on December 3. There we met some friends from Cozumel and boarded the bus to San Cristóbol de las Casas.

I need to admit two things right up front here: I pretty much froze the entire time we were there and there just isn’t enough oxygen at that elevation from my asthmatic lungs. Honestly, if I hadn’t been on a tour, I would have headed for lower ground by the second day. But I was on a tour so that was not an option. I decided to just do the best I could.

The tone for the trip was set that first night when two couples of our group settled in with wine and goodies. They invited us to join them but we didn’t want to stretch their wine too thin. The next night, however, many of us showed up with lots more wine and goodies to share. Those evenings together became a habit and may have been the highlight of the entire nine day tour.

Because we were in the days leading up to the celebration of the Virgin of Guadalupe on December 12, we saw many, many parades and pilgrimages dedicated to her. 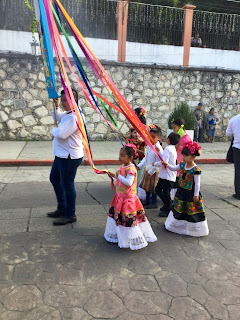 My roommate, Judy, and I wandered downtown and found a wonderful Thai restaurant where we got great veggie bowls, plus wine, of course. I got colder with the dark so we headed back to our hotel room. At least the shower was warm!

Breakfast was included, so it became another great social time for the group. Then we took a tram tour around San Cris and ended up at the Santo Domingo museum and the craft market that surrounds it. The museum had some very interesting ancient weaving, and I got to photograph these lovely ladies in their traditional clothing who were there for a textile conference. 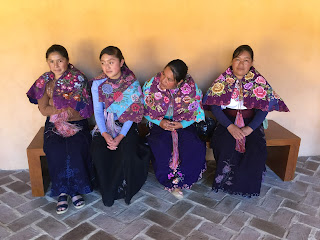 Unfortunately, the main cathedral was damaged in a 2017 earthquake and they haven’t gotten around to repairing it yet.

The next day we went to Sumidero Canyon. The canyon is near Tuxtla Gutiérrez, at a much lower elevation, so it was quite a bit warmer (and it has plenty of oxygen!) The boat ride through the canyon was beautiful, but I really wish I could see it in the rainy season when the plants are greener and all the waterfalls have falling water. We did see four crocodiles and lots of different birds. 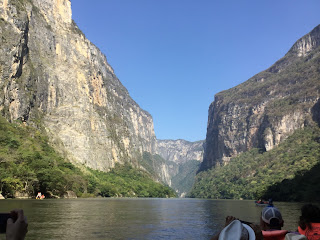 The next day was one of my favorites - a visit to San Juan Chamula and Zinacantan. This trip took us above 8,000 feet, so the breathing was tough for me, but it was worth it. San Juan Chamula is a rather peculiar town. The town is a very close (and closed) community and has some very strict traditions. Everyone who lives there must follow the rules or they will be expelled. The guide said there are no outsiders permitted to live there, even if they marry into a local family. (However, I read a book a few years ago written by a woman who had married into an important family there and was eventually kind of tolerated.) The highlight was the church, which is not quite Catholic. Apparently, a priest visits occasionally to baptize babies, but the Catholic Church does not recognize the people as Catholics. I don’t think they consider themselves Catholic, either. 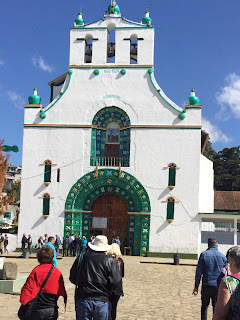 The town is in a valley surrounded by mountains that the people consider sacred. They see the church as a mountain, also. The doorway represents a cave leading into the interior of the mountain. The interior of the church feels very much like a cave. It is rather dark except for thousands of candles and long beams of light that come in from windows high on the walls. The light shines through smoke from the copal incense, creating a kind of mystical atmosphere. There are no pews. The people kneel on a carpet of pine needles, and there are shamans wearing clothing of sheep’s wool. Visitors are tolerated because of the money they bring to town. They must pay an entrance fee to get in and cameras are strictly prohibited, but I think you can google the church and find some photos online.

Then we went to the nearby town of Zinacantan, where we visited a weavers’ co-op. Much of what they had for sale is mass-produced and even available in Chapala, but I found a runner that had been woven on a back strap loom with very intricate patterns. It was almost my only purchase of the trip.

Our final day in the San Cris area featured a trip to Amatenango to see the workshop of a famous potter who often brings her work to the Maestros del Arte feria here in Chapala. After our bus driver performed the amazing feat of actually driving the bus over a tiny bridge and right up to the workshop door, apparently something never done before, we were treated to a demonstration of how she does her beautiful work. 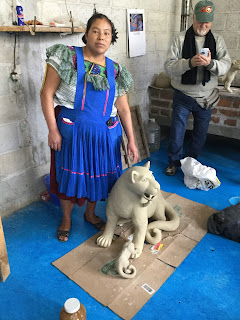 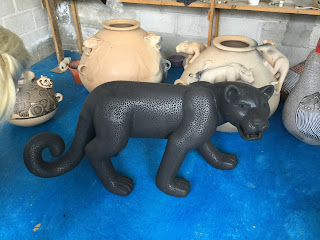 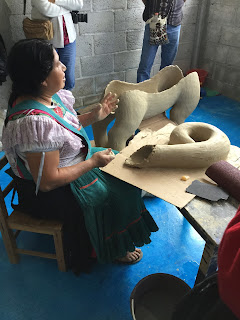 This is where I made my second and final purchase - a clay cup with an intricate design painted on a band around it. I will use it to hold some drawing pens.

This is getting long and with so many photos, I’m afraid you might have problems downloading it, so I will stop now and continue the trip tomorrow.
Posted by Kathy Sterndahl at 7:01 PM