Mahahual, After the Party’s Over 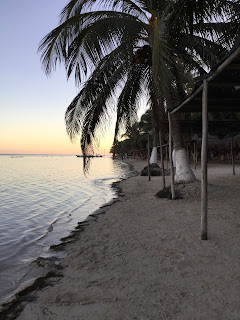 Mahahual is a tiny village on the Caribbean coast of Quintana Roo, Mexico. In looking for information on its population, I found a government site, undated but obviously old, that said it was 280, but the 2010 census put it at 920. I would guess it is higher now, but it’s only about a mile long with two streets and about three short cross-streets.

Mahahual, sitting on the coast away from everything else, was almost nothing until the government developed a nearby port for cruise ships to dock. That was a huge gift to this tiny village. Then, in 2007, Hurricane Dean pretty much leveled the town and the cruise ships quit coming. Within a few years, everything was rebuilt and the cruises were back.

That’s what keeps the town alive, but that’s also what ruins it.

When I arrived on Christmas day, there were two ships in the port. I was told that they each hold 3-4,000 people. Between 9 and 10am, all those people pile into taxis and head into town. By then, all the hotels and restaurants along the malecón have set up tables and chairs and lounge chairs under umbrellas or trees or some sort of shade, literally covering every bit of sand on the beach. Each has its own designated area called a “beach club”. Passers-by are “encouraged” to make themselves comfortable and are assured that they will be well cared for by their waiter. Juan or Pedro will be happy to keep them supplied with their favorite drinks and plenty of snacks and a delicious lunch. And, if that isn’t relaxing enough for them, Maria or Lupita is ready to give them a message with her table set up right there on the beach. Vendors are set up all along the malecón, selling all the standard cheap trinkets, at double the prices we see in other parts of Mexico. They all speak English - at least enough to do business. And everything is conveniently priced in dollars. Lots of dollars.

Peace returns to Mahahual around 4 or 5pm when everyone returns to the ships. But then everything quickly closes down again. All the tables and chairs and lounge chairs are stacked, all the mess of the day cleaned up, and all the workers go home. And there is nothing to do. By now the sun has set and a cool breeze has kicked up, so it’s time to head to one of the few restaurants still open for dinner before returning to my little hotel.

Today, there were three cruise ships. I can’t imagine what is must be like when there are four.

Since I wasn’t interested in hanging out in the middle of all the insanity, I found a quiet place way down at the end of the malecón where I could spread my parreo in the shade of some palm trees right next to the water and relax with my book for a couple of hours.

Tomorrow morning I’ll be on a bus to Tulum. I haven’t been there for over 40 years. I wonder how it has changed???
Posted by Kathy Sterndahl at 6:48 PM