I Found an Apartment!


I found an apartment this morning! It is owned by my friend Judy’s landlord and is only about a kilometer from her apartment. It is being completely remodeled, so I will get to choose cabinets, colors, furniture, etc. It is two bedrooms, but it is small, about 550 sq. feet - almost like a tiny house on the third floor. One bedroom will be set up to accommodate my quilting and art and the other will be for sleeping. I’ll have a sofa bed in the living room for guests.

The remodel is still in process, but this allows them to take their time to get it done while I am wandering around the Yucatán Peninsula. It will help me to know I have a place to come home to and it will help the landlord to know that he already has a long-term renter lined up.

This isn’t any thing fancy; it’s rather simple and minimalist - just what I want. Even the rent is minimalist: $400 US per month. I don’t have a pool, but if I want to swim, I can visit Judy. It has safe parking for regular use but not secure enough to leave my car while traveling. Again, Judy will save the day. I can park in her very secure space while I travel. And, at sea level, those two flights of stairs aren’t bothering me one bit! I’m not even out of breath when I reach my door!

I thought for sure I would rent in Old Town, but when I spent four hours walking those streets on Sunday, looking for “for rent” signs, I realized just how bad the roads are, how difficult it is to walk the sidewalks, how dirty and crowded it is, and how full of tourists. I recognized just how different it is a bit farther north, near the marina. I will be quite near Costco, Sam’s, Mega and La Comer, and yet I will live in an apartment complex that is almost all Mexicans (and, interestingly, almost all women.)

So now I have my house sold, almost all my stuff moved and in storage, and I have a place to live. I feel like I’m on a roll!
Posted by Kathy Sterndahl at 3:18 PM 1 comment:

All my worldly possessions (well, almost): 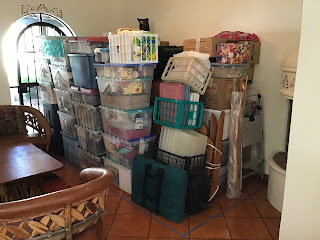 I have everything packed and stacked and ready to go. The movers are due to arrive in two hours to load up the truck, then we will head to Puerto Vallarta in the morning.

I sold the house furnished because I intend to rent furnished, but this is still too much stuff to be moving around. I will continue to work on purging the  excess and try to avoid buying anything that is not consumable.

Actually, over half of this huge stack is quilt-related. I’ve always been a better artist than salesperson, but I think sales will come easier in the larger population of Puerto Vallarta. 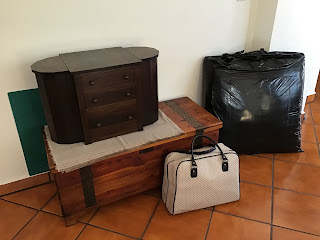 I have a few items that I will take in my car. My grandmother’s cedar chest that she promised to give me when I was a child and then made sure it would get to me after she died, and her Martha Washington sewing cabinet. My trusty sewing machine and my cutting boards, which would warp in the heat. And my meditation pillow.

I’ve been working pretty much seven days a week since late June to get the house all fixed up and then to go through every drawer and cupboard and closet to decide what to get rid of. I never realized what a hard job that would be! I hired professionals to handle my yard sale in September because I knew that I would think things were worth more than other people would. I didn’t even allow myself to check their prices; I just hid out in my casita next door.

Once that was all cleaned up and my pocket was full of money, I started doing the same thing with my fabrics and quilting supplies. I did sell lots of fabric, books, patterns, quilting supplies, etc. - it was just like I had my quilt shop again. I had hoped to sell lots of quilts, but that didn’t happen. I don’t think I’ll have any trouble selling them in Puerto Vallarta because there are so many more potential buyers there.

Anyway, once everything is safely stored away in Puerto Vallarta, I will enjoy a week of relaxation at my friend Judy’s house. She is fixing me up with some rental agents to see what might be available in  March or April. I’m hoping this will work out so when this year’s flock of snowbirds heads north, I’ll be able to move into my new apartment.

I’ll let you know how that comes out when I write again in a week or so.

Kathy
Posted by Kathy Sterndahl at 1:00 PM No comments:

I feel as if I’ve been on a roller coaster since I last wrote. I wanted an adventure....

The buyers were a bit slow in coming up with the Contrato de Compra-Venta that laid out the terms of the sale, and when it came, I was surprised that I understood so little of it. I’ve signed three of these since I’ve been down here, usually a form from a realtor, but one was private, and they were pretty clear. This one was very confusing, so it is a good thing that the notario had offered to check it out for me before I signed.

He told me that the reason I couldn’t understand it was that it was written with very archaic language that would even confuse a Mexican who wasn’t a lawyer. Who knows where they got it from, but it was crazy!

It said they would deposit 10% in my bank account and then bring me a receipt to prove it had been paid. Then I would sign the contract. That part was pretty standard. But then it went on to say that the buyers would take possession of the house at that point. It allowed either the buyer or the seller to back out for a mere $20,000 peso penalty. That’s about $1,000US. The way the notario explained it, the buyers got to move in upon payment of the 10%, but then they could back out of the deal and we would never close. Eviction laws protect the person in the house, so it was likely to take years of court battles to get them out. Eventually, they would lose and would have to leave and then would have to pay me the $20,000 penalty - and nothing more, even though I’d spent years fighting the case in court.

I sent the buyers a message stating that their contract was totally unacceptable and carefully explained why. Up to that point, I had been communicating with the nephew because he understood some English. That night the señora called me to say that all communication was to be directly with her from then on.  I guess the nephew was responsible for that contract. Although the buyers are responsible for all the closing costs, I offered to have the notario draw up a contract and I said I would pay for it. I wanted to be sure that I was protected in this deal.

I was worried that they would change their minds in the week it took to get the new contract, but, no, they deposited the 10% in my bank account before I even had a contract for us to sign. I sent them a copy but I still didn’t have it signed quite a few days later. I finally explained to the señora that without that contract signed by both of us, if I was less than honest or if something happened to me, they had no proof of any agreement and I had both the house and the money. They got the signatures and got it back to me the next morning and I got my signature witnessed and back to them right away.

I don’t think there was any bad intention with the crazy contract. My guess is that someone copied it from a very old document which required 10% down and then the rest on payments over time. A $20,000 peso penalty would have been very substantial in those days.

So this is where things stand right now. The current contract has a penalty of 20% if  either party decides to back out. I know I won’t change my mind, and I have to admit that I wouldn’t even be too upset if they backed out and I ended up with the house and 20% for my trouble. But that’s not going to happen. The closing date is December 16, five days after I get back from my trip to Chiapas.

Posted by Kathy Sterndahl at 3:25 PM No comments: