This post is nothing like I’d planned. I’ve taken lots of photos of my house and was planning to write an ad to try to sell it.  I expected that the house would sell fast because it is in a really good area and there just aren’t any other houses in this area for sale. My good friend owns a printing company, and they made me a big sign to hang on the front of the house. It very simply said “For Sale” in English and Spanish and included my phone number. I had a feeling that I could sell it without a realtor, just as I did my house in Portland before I came here.

The sign went up last Saturday, just after my last post. Within 30 minutes, I had a call requesting a showing. I continued getting daily calls, about half of them from realtors wanting me sign a contract with them. Everyone who saw the house loved it, but most said they needed to sell another house before they could buy this one. No, I was not willing to wait.

I received another call this last Saturday night. I was actually already in bed, but I’m an early to bed, early to rise kind of person. Normally, I wouldn’t have answered, but this time I did. It was a Spanish-speaking lady wanting to make an appointment to see the house on Sunday. I was glad I had answered.

Time in Mexico is kind of a relative thing, and a one o’clock appointment could end up being any time within the next few hours. I was surprised when my bell rang at exactly one. The young man named Jonathan told me his family was coming down the street and as we waited, he seemed to test my Spanish ability. I was surprised when ten adults and two children filed in my gate!

I got them all into the house and proceeded to give the tour. It seemed that the interested parties were the older couple, but I wasn’t sure. Sometimes parents buy houses for their kids. It was kind of strange.  I gave my whole shpiel in Spanish, and I don’t remember being asked a single question. I figured they didn’t like it for whatever reason and led the group back toward the front door.

As we returned to the front room, Jonathan sat down at the table with his cell phone in front of him. For a few minutes no one said anything, and then the older man stepped forward and asked Jonathan to figure out the exchange rate, since I was thinking in dollars and they were thinking in pesos. Jonathan told him what it was , and he turned to me and asked if I would accepted an amount 25% less. Without hesitating, I cut the difference in half, which was conveniently exactly what I thought I’d get. He hesitated for just a minute and then told me that they had some other property that they were selling - but this time, they already had a buyer. Honestly, I was confused. I wasn’t sure if they were agreeing to my price or not. He shook my hand, said something about talking about it, and led the family out the door. But Jonathan and the señora stayed behind. She asked if I would accept 10% down and close in 30 days. I finally turned to Jonathan to be sure I was understanding what she was saying. Yes! With lots of hand-shaking and many “gracias”s from both sides, They left, saying they would call me today.

I was still afraid to get my hopes too high. They could easily back out. I told a very few people because I still didn’t trust that it could be true. We aren’t even done with the touch-up work!

This afternoon, again about one o’clock, the señora returned with Jonathan and one of the young women. They asked me to show it to the young woman because she hadn’t seen much in the crowd. Then the señora asked if I would be willing to sign a private sale contract without a lawyer involved. (The buyers are responsible for costs here.) She asked for my bank account information so they can deposit the 10% in my account and bring me a receipt to prove that they had done so. (That is a very typical way of paying here.) Then we will sign the sales contract with witnesses.

My friends, both Mexican and American, are trying to watch out for my interests. The bartender at the American Legion next door says that I also have to call the bank to verify the deposit. The notario (who is also my lawyer) says he would like to review the contract before I sign just to be sure all is good. I will take their advice, but I honestly don’t think these precautions are necessary. I feel like I’m dealing with a family whose handshake on a deal is as good as a contract, just like I think. Today, the señora told me they are from Irapuato, in the state of Guanajuato. I told her that I love Guanajuato and she told me I have a home there. I told here that I have a small problem in that I have a tour booked for early December that leaves from here and if we close before that, it will make things a bit difficult for me. They offered to wait until January, but we settled on mid-December for the closing.

So it looks like I’ve sold my house and will soon be on my way to my new adventure. Since I have realized that my road trip will take place during the winter, I’ve made some changes in my plans. Winter in the highlands of Mexico can get pretty cold and it is probably not a good time for car camping. So I’m going to fly to Chetumal, just north of Belize on the Yucatán peninsula. From there, I will take my time (I’m thinking three months) traveling by bus around the states of Quintana Roo, Yucatán, Campeche, Tabasco and Veracruz - all those places that are too hot (and hurricane season) during the summer. I’ll save the car camping in the highlands for the summer when it is too hot and humid in Puerto Vallarta.

Until next week!
Kathy
Posted by Kathy Sterndahl at 5:29 PM 1 comment:

Has it really been three years since I last posted?

Yep! I guess I abandoned all my faithful readers a long time ago, and I am sorry about that, but I just kind of moved on to genealogy, became totally engrossed in that, started a new blog, and left you all behind. I’m sorry! Please forgive me. I think you will be happy you did.

I’m still here in Chapala, and life is still wonderful, but I have some serious changes coming! I’ve lived in Chapala for fifteen years - at least five years longer than I’ve ever lived in one place before. I’m ready for some changes, and I would be happy to bring you along with me.

I’ve decided that I’ve become too stuck in one place, so I’m ready to become unstuck. After all this time in a relatively small town (I think the population is about 22,000, but that might include the whole county), I think I would enjoy some place larger. I also want to move to a lower elevation where breathing comes easier to my asthmatic lungs. So I’ve decided to move to Puerto Vallarta. Sun, sand, the beach, and apartments with air conditioning for the very hot and humid summer.

I’m seriously downsizing my “stuff” so that I can easily lock the door and go or put it all in storage and take off for even longer trips. I’m planning to rent a furnished apartment close enough to the beach that I can take a walk along the malecón early each morning. There’s only one problem with that: by the time I sell my house, all of the best apartments will be rented to people who come down for the winter. But I’ve got a plan for that.

When I rudely left you three years ago, I had been carless for over three years, but I came to realize how much that limited my ability to head out on a road trip. The buses are wonderful here, and I used them a lot, but I kept getting bronchitis and realized that it was usually after long bus trips. So in December of 2016, I bought a Honda Fit. What a great little car! I love it!

Another big change since I wrote is that I became a Mexican citizen in April. Now I have dual citizenship with the US and Mexico. I guess I’m an American-Mexican, but that certainly doesn’t roll off the tongue like Mexican-American. (Yes, I know very well that Mexico is part of North America. I didn’t have anything to do with the common language usages, so please don’t hassle me about it.) During the year I was studying for the exams and jumping through government hoops, I told myself that I would celebrate becoming a citizen by traveling around Mexico, revisiting favorite places and discovering others that are new to me.

Since fall is the best time to sell a house down here (that’s when new retirees coming looking) but spring is the best time to find a good long-term apartment in Puerto Vallarta, I’m going to end up with a few months without a home. Don’t worry; I know there are a bazillion ways to solve that issue, but I’ve decided to solve it by taking that trip around Mexico that I’ve been looking forward to.

I don’t want to be tied down to a strict schedule and reservations, so my little Honda Fit is about to become a Car Camper. This way, I’ll be free to follow up on suggestions from other travelers and to change my plans at the last minute. When I get to the town I want to stay in, I will look for a hotel. But if I don’t find one, and there is no campground, no problem! I’ll just park next to the village plaza, climb into my comfy bed in the back, close my privacy curtains, and go to sleep.

I don’t know when all this will happen. I’ve shown my house four times, and three of the people say they love it and say they are working on figuring out the finances. It could go quick or it could take a while. My next post will be a blatant ad to try to sell the house. If you’re not interested, don’t read it. But wish me luck for a quick sale.

In the meantime, the sun is setting on my relationship with Chapala. 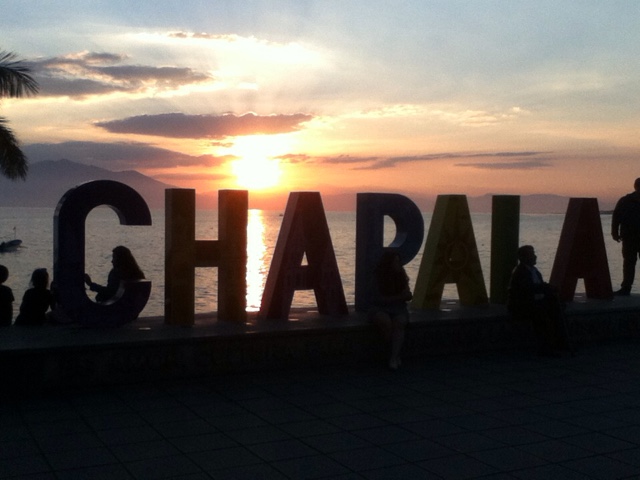 Posted by Kathy Sterndahl at 2:25 PM No comments: