Out with the Old and In with the New

As you can see, another six months have passed without a post to this blog. I really have tried to stay inspired, but I think I just ran out of things to say here. I'm ready to move on to new things.

And so... I've started another blog! The introductory post came online this morning. It is completely different than what I've been focusing on here. I hope you will join me here for 2015: A Year in Sketches.

I'm excited about using Urban Sketching to improve my drawing skills as I share scenes that I see around me every day. Since my retirement is an adventure in Mexico, most of my sketches will be of local scenes. But if I travel, I'll take you with me.

PS - For more information about Urban Sketching, check out www.urbansketchers.org
Posted by Kathy Sterndahl at 8:00 AM 1 comment: 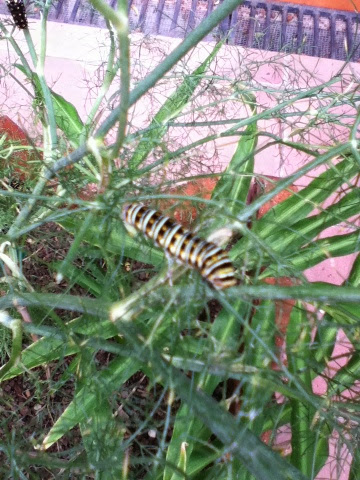 One of the first new plants I added to my garden after deciding to try this organic garden experiment was a single dill plant that I saw for sale at the local market. I stuck it in the ground with some fresh new soil and watched proudly as it quickly grew to a couple of feet in height.
Then one morning I noticed lots of bright yellow aphids covering the stems. I might have been tempted before to grab the bug spray and put a stop to them, but I've never sprayed any of my herbs. I instead tried to wipe off (and squish in the wiping) as many of the little rascals as I could.
Each time it seemed that I might be winning the battle, I would suddenly find lots more aphids. Then one morning when I went out for my usual routine, I noticed three ladybugs and a small praying mantis on the dill. I finally had reinforcements!
For the next little while, the good guys seemed to be advancing on the bad guys, so I left them to do their job. Then one day I noticed a bunch of strange-looking black and orange critters all over the dill. No more ladybugs and no more praying mantises and only a few aphids, but what what going on now?
I carefully went over the plant and picked off each of the 10-12 critters along with the piece of branch he was sitting on, placing them in a small box that was handy. I set the box in the patio intending to 'deal with' them before I went inside, but I forgot all about them.
The next morning when I went back outside, most of them had climbed out of the box but were still nearby. I began to gather them up to get rid off (squish) them, when I realized that something was nagging at the back of my brain. Could these critters be baby ladybugs?
I went back inside to consult the internet and, sure enough, they looked just like the baby ladybugs in the pictures. Relieved that I hadn't killed my babies, I went back out and sprinkled them back onto the dill plant. I wanted all the ladybugs I could get!
After a few rainy days that kept me inside, I again went out to check on my babies. These things definitely weren't changing into ladybugs; they were now twice the size they had been and looked very much like caterpillars and were eating the plant, not the aphids.
Once again, I picked all the caterpillars off my dill by cutting the bit of branch they were on. I stuck them into a bottle in preparation for anihilation, but, once again, I got curious.
Back on the internet, I searched for photos of caterpillars that like to eat dill. My very own critters came up in one of the first photos. It seems that I had captured a bunch of developing swallowtail-butterflies-to-be!
I was hoping to use the dill for some pickles, but I also was excited by the idea of growing a crop of swallowtail butterflies to pollinate the rest of the stuff I had growing. Of course, one plant isn't enough for all the pickles I hope to make, and the squirrel that showed up a few days earlier had eaten the tops off all the cucumber plants anyway, so I carefuly removed each caterpillar from the bottle and returned it to the dill plant.
The caterpillars and caterpillars-to-be are all doing fine. The dill plant is still trying to grow faster than they eat. I don't see any more aphids, so I guess that battle is won for now.
I hope I'm right and they will become swallowtail butterflies, and I hope they stick around and enjoy my garden. I'm sure this has been only the first of many such experiences as I learn to tell the difference between the good guys and the bad guys. Next time I will do my internet research before removing the critters in question. And may the good guys continue to win!

A Note to My Readers

I know, I know... I haven't been keeping up with my blog for a long time. I'm sorry, but I guess my priorities have just changed.

I began work in November for a quilt competition in Mexico City. It was probably the most time-consuming quilt I've ever made. At the same time, I was working on hand-piecing and hand-quilting a quilt for a very special (to me) baby in Japan. The good news here is that the quilt made it from Mexico to Japan, and I won the "Judge's Choice" award and a new sewing machine. (No photo today but I will write about the quilt and contest soon.)

As soon as I'd finished the quilt - and before the competition - I began digging out and throwing out or moving almost all the plants in my garden. I loved the Jungle look I had going, but so did the bugs. As they say here in Mexico, I had a "plague" of scale insects. All the healthy "Jungle" plants are now in my various patios, but I had scale on just about everything else and nothing seemed to help. We trimmed tree-like bushes back to 2-3' bare branches with no leaves for the scale to hide on, and everythig else is down to  bare ground. I'm bringing in new top soil and planning to replant with herbs - both the culinary types and the smell-good types. I'm also planning to expand my beds to make room for a few Heirloom vegetables in between the other stuff. Growing season is pretty much year around here. We have just entered the hot, dry season. In mid-June, the rains will come and will bring cooler weather. That seems like the best time to plant.

And that will be good timing, too, because am I leaving in two weeks for what has become an annual long vacation. I had thought I'd stay closer to home this year, but a good friend invited me to join her trip to London, Greece, and Turkey. An offer I couldn't refuse! Adding a week of shopping time in California, I will be gone for 6 weeks. We have rented an apartment in Athens and she has arranged a couple of home exchanges in Tinos, Greece, and Ortakent, Turkey, so we will be in hotels only in London and Istanbul.

Finally, I want to explain that I have had to start approving comments before posting them. Unfortunately, I am being inundated with comments that are not much more than outright commercials or links to other sites. I am sorry if you are one of the people who has commented this way. I do not have the time to check out all of these links, so I will automatically mark any linked comment as spam.