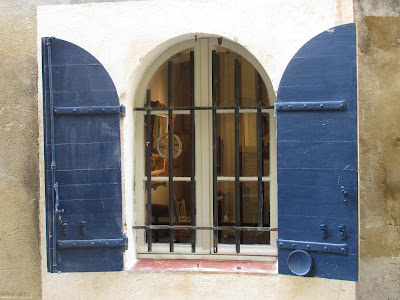 I try to pay attention to windows and doors when I walk around old towns like Aix. If you think about it, the doors and windows in villages like this are much like the front yards of houses in the US. They are the face that the occupant presents to the outside world. Many are just plain, one more in a row of many others just like it. But some people go out of their way to make sure there is something special that sets their window or windows apart from the others nearby. It is like these special ones have a personality all their own.
This first one, for example, is a fairly simple window set into a very plain building. But, to make it special, the owners painted a white rectangle around the area where the window is located. Add those blue shutters, and it was like no other window in the area. 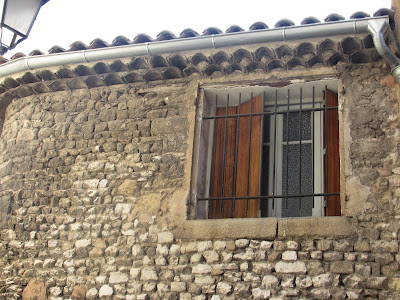 This one is in a very interesting rounded building of very old stone blocks hidden back on a little side street. Under that window is a very ugly garage door that ruins the whole effect. But I like that this photo shows how the tiles are built up under the edge of the roof. 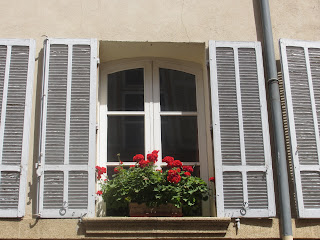 This is just one of a long row of matching windows, probably all belonging to the same apartment. Every window has its own matching gray shutters and red geraniums. 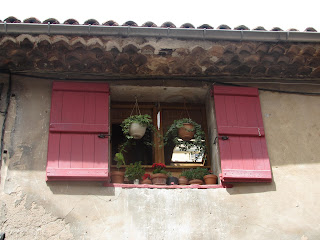 This next one is above the entrance to a restaurant. The owners probably live in an apartment above. As I stood across the street taking this photo, I realized that the owners were standing in the doorway of the restaurant below and that they were talking to me.  We were able to communicate a little, but it sure would have been more fun to have a real conversation with them. I would have liked to tell them that I, too, would have my window full of plants if I had a window like this. 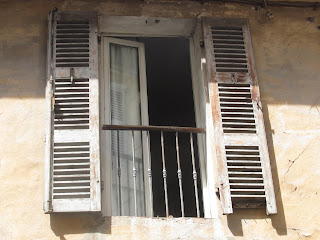 This last one reminds me of a woman who is passed her prime but hasn't quite figured it out yet. You know the type: hair dyed to cover the gray but always just a little bit messy, make-up that is a bit too much and never quite straight, and wearing clothes that were probably stylish when they were purchased 20 years ago. It may need some work to get it back into shape, but I would love to have long windows like this that could open to let the world inside but with shutters to preserve my privacy.
Thanks for reading!

Posted by Kathy Sterndahl at 1:25 PM

Email ThisBlogThis!Share to TwitterShare to FacebookShare to Pinterest
Labels: France