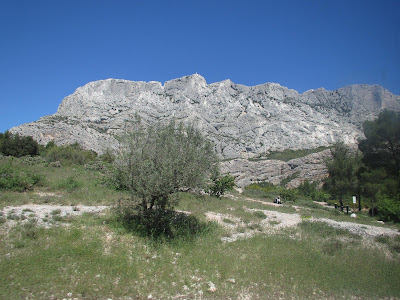 I had an adventure today. After carefully pouring over all my bus schedule brochures, I decided to take the shortest trip first; Le Tholonet is only 5 kilometers east of Aix. It is a place where Paul Cezanne used to like to hang out and paint pictures of Sainte-Victoire mountain. 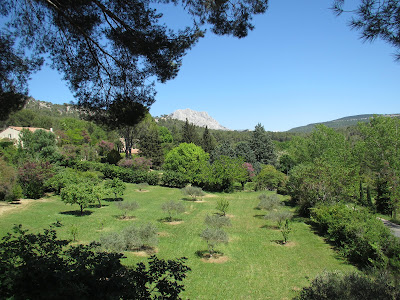 I walked to the bus station and bought a carnet worth 10 voyages for 7 euros - just about $10. That worked out great. I even said it in French; I was so proud of myself!. I had already noticed the spot where the bus would arrive, so I was ready when it got there. I got a window seat close to the front so I could see everything as we traveled. 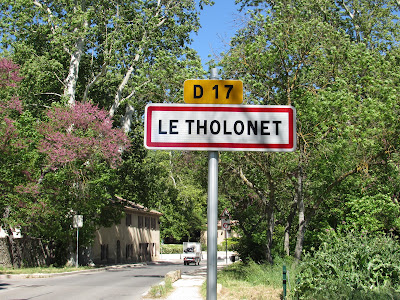 After a few stops as we made our way through Aix, we went along a very narrow country road with trees on both sides of the road. It looked like I wouldn't mind camping anywhere along the way. After only about 15 minutes, we pulled into the village of Le Tholonet - and kept right on going out the other side of the tiny town. I had assumed that there would be an automatic stop. I had assumed wrong. 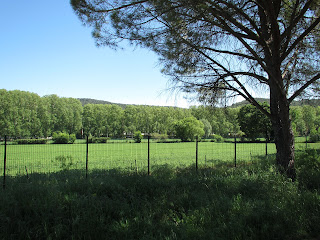 I had the schedule with me so I knew that the bus would go to four other places and then turn around and go back the other way. And I knew that my fare paid for any of the stops, so I wasn't too worried about it. When we got to the village at the end of the line, the last few passengers asked to be dropped off at various places. As the last person stepped off the bus, I approached the driver. He asked (I'm sure) where it was that I wanted to be dropped off. When I told him Le Tholonet, he said (I'm sure) "Well, why didn't you say something?" Then he said that we would just turn around and I could get off when we got there again. I thought he might make me pay again, but he didn't. 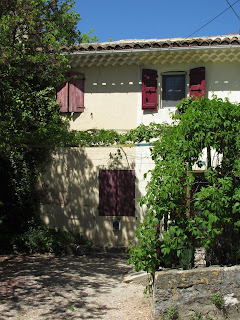 As we rode along, I was now on the mountain side of the road so I got a lot of photos with my iPod Touch, which works faster than my camera. This time, when we got to Le Tholonet, he made sure that I knew where we were and that I got off the bus. By that time, it was mid-afternoon and I was hungry. I had hoped to find a small market to buy some fruit and something to drink, but the only open business in town seemed to be a restaurant - Relais Cezanne - a place where  Paul used to hang out. I figured it would be expensive, but what choice did I have? 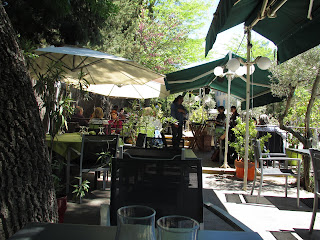 It had very nice outdoor tables across the street from the restaurant. As I watched the waitresses go back and forth with trays of food and dirty dishes, I wondered if there had ever been an accident. The menu had lots of pizzas for under 10 euros, but of course I couldn't eat them because of the gluten. I felt like I wanted something more substantial than a salad (which started at 16 euros), so I ordered something with salmon from the entree menu. Gluten-free and vegetarian did not seem to be an option, but it rarely is except in Portland. 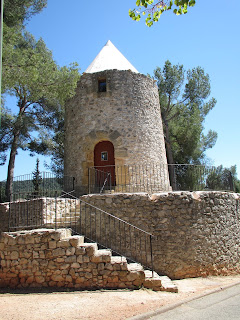 When the waitress brought my 16 euro salmon entree, it was a handful of mixed salad greens, half a tomato, and four very thin slices of raw salmon. This is why I prefer to eat at home! It was actually very good, but I was looking for something a little more substantial to energize me for walking around mountain-y roads. 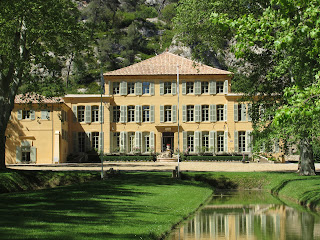 There really isn't much in Le Tholonet: a old windmill without the arms, a chateau from the 1640s that now belongs to the canal company, an old church and cemetery, and pretty scenery. I couldn't visit the church or cemetery because there just happened to be a funeral going on. I feel bad for the people who lost a loved one, but really, what are the chances in a town of 2,200 people? 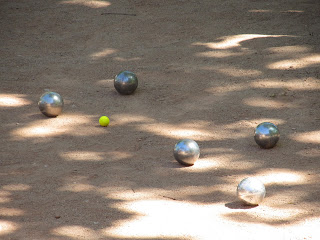 I walked down the road and considered walking to the dam that Emile Zola's father built, but it turned out to be another 35 minutes away. I don't like hiking like that by myself, so I ended up hanging out at a park where people were playing petanque - or maybe it was boules. I don't know. I thought boules was Italian and petanque was French, but the petanque balls that I have are much smaller than the Italian boules balls, and these people were playing with large (maybe 4" diameter) stainless steel balls. 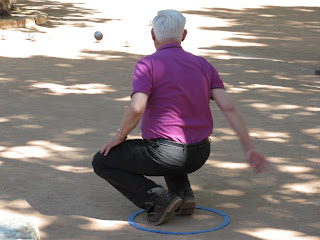 Because I do have a set that Terry and I used to play on the beach (and the salt and sand caused them to rust) I kind of underestand how to play. I found out a lot, though. We used to throw the target ball about 30-40 feet from where we were standing. No wonder it was always so darned hard to ger near it; sometimes I could even see the danged thing! These people threw the little target ball only about 12-15' - much easier to aim for. And of course, our beach sand was softer than this hard-packed sand that they were playing on. But I'm sure that they had played there for so long rhat they knew every single slope and hole in that ground. They must have been playing in teams, becuase there were about six of them. 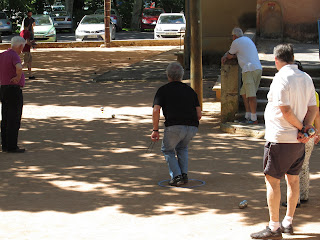 Using very interesting deliveries, everyone would get as close as they could to the target ball, and then the oldest guy, who must have also been the best, would take his turn and I swear he never failed to knock the closest balls way out of the playing field.

A few of the players tried to talk to me, but none of them spoke any English. We communicated enough that I was able to say that I had played, but that was about it.

Actually, I find that I can understand people pretty well. I just can't seem to call the French words to mind when I need them. I can't begin to count the number of times I have said "si" instead of "oui".

The adventure of my day continued when I got on a different bus to come home. This time, I made sure that I asked if he went to Aix and then to the old center of town. Everything confirmed, I got on the bus. However, this one did not go back to the place where I had orignially boarded this morning. The bus drove all the way around the outside of the old town and then turned away. I thought (hoped) that he would turn back and go to the bus station, but when he cought sight of me in the rearview mirror, he said, "Didn't you want the village center?" when I said yes, he answered (I think), "Well, it was back there" and pointed behind us. Fortunatedly, we were still close enough that I knew where we were and I hurried off the bus and walked the few blocks to my apartment.

I had a bottle of rose in the fridge calling to me.

Posted by Kathy Sterndahl at 2:28 PM