From the Knights Hospitaller to Bach and Beyond 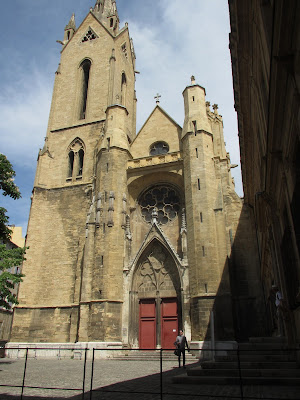 OK, so I know this is a very weird title, but it gives you an idea of how my brain works. Last Monday, Pentecost Monday, I attended a "Spiritual Hour" at the Iglise Saint Jean de Malte (Church of St. John of Malta,) which was built in the early 13th century.

How did this come about? I love the architecture of the church, which I can barely see from the windows of my apartment, so I looked it up online. Along with the history of the church, I found out that they had a free concert of Bach music scheduled for Pentecost Monday (which I also had to look up since I had never heard of it.) 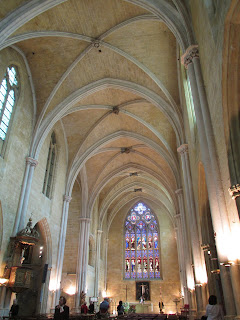 The first time I had visited the church, I had wandered in during the tail end of a mass that had less than ten people attending. It seemed kind of sad - like this beautiful church was not loved by the people any more. As the church filled to standing room only for the concert, I was happy to see that my first impression was wrong. I don't know how to explain my feelings on this. I am not a religious person, but as I look at this building, it is as if I can feel the hope and faith and love of all the people who worked so hard to build it and those who have worshipped here over the past 700 years. It would be a shame if that faith faded away. 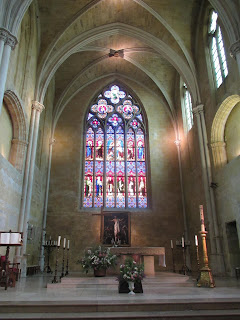 *** A note for my non-American readers: We Americans pretty much consider anything over 100 years old to be really old. It is hard for us to really comprehend a building that was built before the Aztecs or the Incas ruled their empires. That far back in history, almost all of us were Asians or Europeans, or Africans. More recent immigrants still retain some of their cultural history, but most of us lost that when we got mixed into the "Cultural Melting Pot" that our country became. 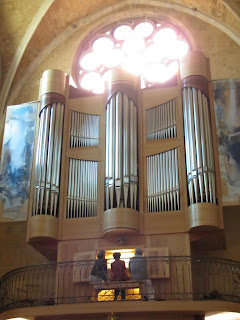 The concert was quite interesting! It turns out that Bach wrote music specifically to be performed for Pentecost in 1724. BWV 173 and BWV 184 were first performed on Pentecost Monday and Tuesday of that year. Singers from the Bach Academy of Aix performed the pieces, accompanied by musicians playing violins, a cello, a bassoon, and flutes, plus the huge pipe organ. The pipe organ was also played during the half hour before the concert began; it reminded me of the  Phantom of the Opera - kind of spooky.  The singing was all in the original German, but the program provided a translation to French and English. I do have to say, though, that the chairs became less and less comfortable as time went by. 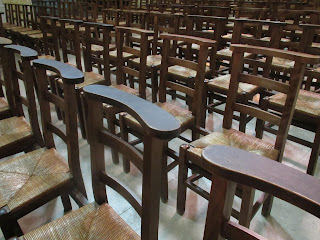 During the 12th century, they built a hospice and chapel just outside the walls of Aix. An ancient Roman road ran right through Aix, so this was a natural route to the Holy Land. 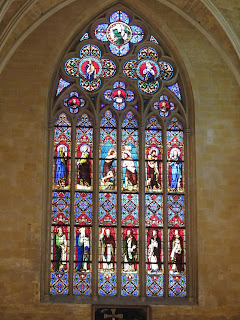 The order had grown, and during the 13th century, they built the current church and priory on the same grounds as the original hospice. It became the burial place for the Counts of Provence.

Now we jump forward a few hundred years to 1629, a really bad year for the plague. After it was all over, they seem to have decided it had something to do with a small pastry that is traditionally made here - the Calisson. Or maybe the Calisson bakers started that rumor to encourage people to eat more of their treats. 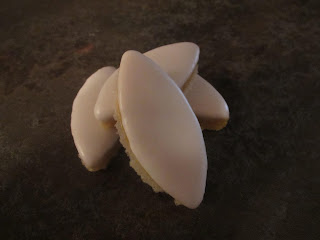 Calissons are small (and expensive) little goodies made of almond paste, glazed melon, and fruit syrup and covered with a white icing.

As the story goes, on January 20, 1630, a mass at the church was dedicated to the Virgin of Seds, the patron saint of the city, to thank her for keeping them safe from the plague. The Archbishop blessed a bunch of Calissons and they were given out to the people.

Every since that time, on the first Sunday in September, they hold La Benedicion des Calissons. The celebration includes parades, people in traditional clothing and doing traditional folk dances, a may pole. The photos here are fun (click on the tiny British flag to see it in English.)

Thanks for taking the time to read my blog!

Posted by Kathy Sterndahl at 4:43 AM