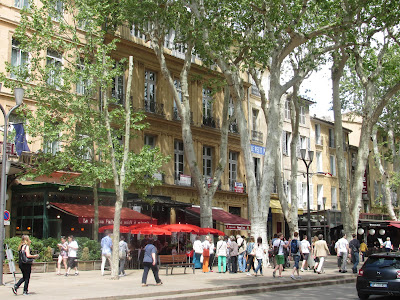 The Cours Mirabeaux is the most famous street in Aix and the place where everyone wants to be and be seen. Built on the ramparts of the old town in the mid-1600s, the richest folks in town immediately started building themselves townhouses along both sides to show off just how much money they had. 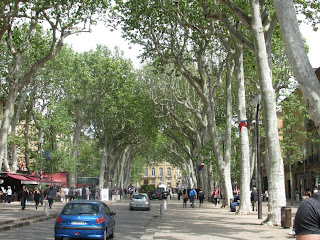 This road became the dividing line between the old town and the new. The old town has winding roads and alleys that could be easy to get lost in without a map. The new town was carefully laid out with very straight roads on a grid. It is actually only about six blocks square. All of the buildings look like they were built more or less at the same time and by the same person.﻿ 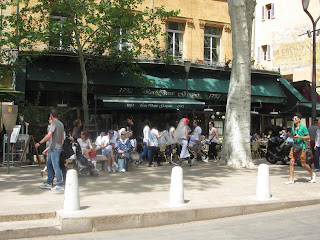 The famous restaurant Cafe des Deux Garcons has been here for a long time. Paul Cezanne wrote about hanging out there in 1906. Now everyone wants to hang out there. I had a peek at the menu but didn't see anything I would be willing to pay those high prices for. But I guess I've never been big on status symbols. 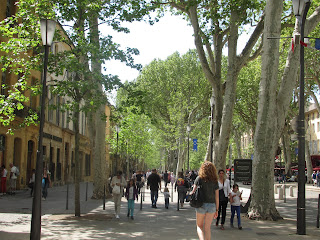 One of the really nice things about this street is the lovely plane trees that shade both sides of the street. There are two rows of them on each side, so it is always nice and shady. One of these days, I'm going to grab myself a spot on one of the benches and just sit and watch the world go by. Fortunately, my apartment is only a very short block to the Cours Mirabeau, so I can visit often.
Thanks for rreading!

Posted by Kathy Sterndahl at 12:47 PM