Five or six years ago, I was having a drink with friends I hadn't seen in a while. Ellen asked me what I had been doing lately, so I told her about a trip I was going to take the following weekend. I was planning to drive about 225 miles north to explore the city of Zacatecas in the state by the same name.

Ellen told me that she and her husband had planned to travel a lot when they moved to Mexico, but they didn't speak much Spanish and were worried that they would have problems. They wished that they were brave enough to travel around like I do. I said, "Well, why don't you come with me?" She looked at her husband who said, "Sure. Go. Have fun!" So the following week we were off. 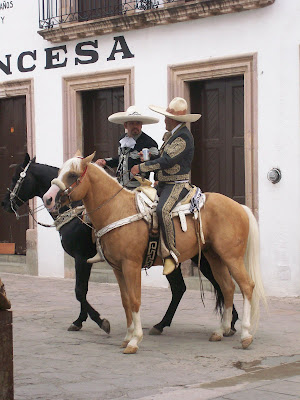 The worst part of the drive was going through Guadalajara - a long trip with lots of traffic through an area of town that was new to me. The city just kept going on and on forever, it seemed, but at least I had a navigator. Finally, we left the city behind and dropped down into the barrancas - the huge canyons on the north side of Guadalajara. It was the rainy season, so we dropped into a rain forest with waterfalls plummeting down both sides of the canyon. Unfortunately, there was no place to pull over to enjoy the view or take photos.

About an hour shy of Zacatecas, we came to the town of Jerez, in which Lonely Planet says "saddle-bound rancheros drink outside the saloons." It seemed like a good place to stop for lunch. 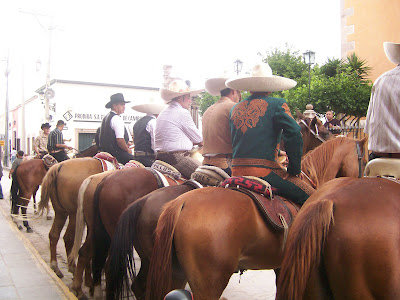 After a nice traditional lunch, we decided to explore Jerez a bit before continuing our journey. As we headed toward the cathedral - which is always a good place to start exploring a Mexican town - we saw a couple men ride by dressed in very nice charro suits. They each had a can of beer! Lonely Planet was right!

We continued toward the cathedral and found many more dressed-up men on horseback. They were lined up facing the entrance of the cathedral. It turned out that there was a wedding going on and they were waiting to greet the new bride and groom when they came out. The church must have been full of their wives. 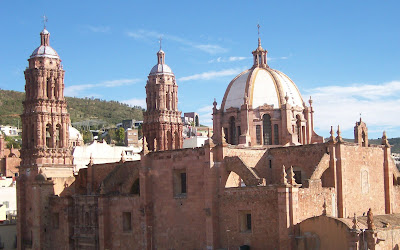 Zacatecas is famous for it's silver mines. The local natives had already begun mining here before the Spanish arrived.

When the conquistadors found out about it, they didn't waste any time moving in a taking over. In the days when the Spanish ruled, the mines around Zacatecas supplied 20% of the silver that was being sent back to Spain. 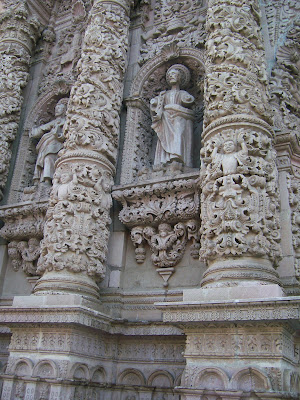 The center of the town is dominated by the cathedral which was built in the first half of the 18th century. The front is covered with detailed carvings in the Mexican baroque style.

The photo above, of the side and back, was taken from our hotel. Unfortunately, we never found a good place to get a shot of the whole front of the building.

There are many colonial buildings around the town, but I find that I prefer the ones that are not much more than ruins.

I am intrigued by all of the arches that are left standing for many years after the rest is falling down. It demonstrates how important all of those arches were to the overall integrity of the buildings. 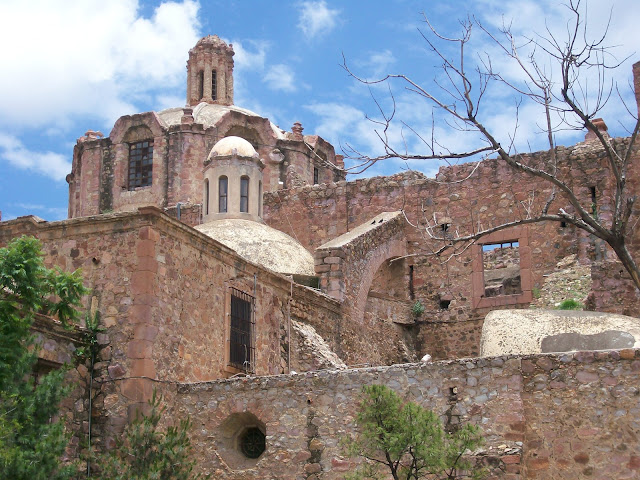 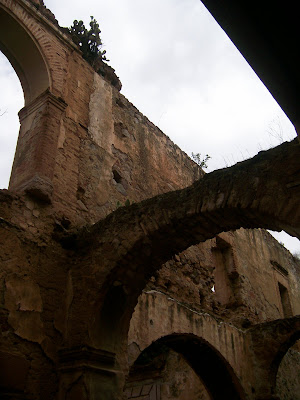 I'm pretty sure that this is the former Templo de Santo Domingo. (Sorry, it's been a long time.) 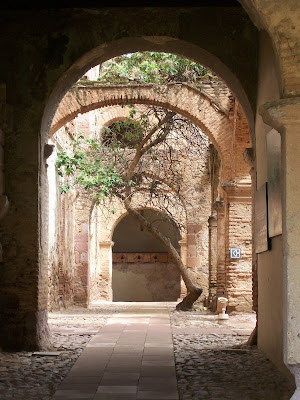 All of these photos of arches were taken here. I felt like I could just walk around in here all day exploring this wonderful old place. 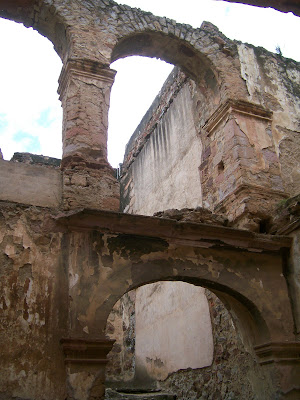 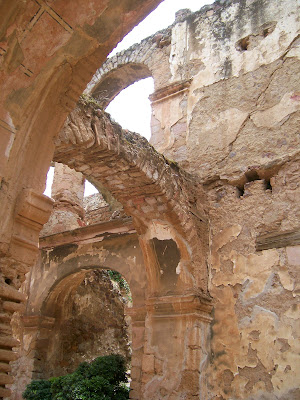 Very near the Templo is the Museo Pedro Coronel. This museum is in an old Jesuit college and contains one of Mexico's best art museums, including 20th century works by Chagall, Miro, Picasso, and Kandinsky.

Later, we found our way to the Museo Rafael Coronel, who was a brother of Pedro and son-in-law of Diego Rivera.

The best part of this museum is the 3,000+ masks that were used in traditional ceremonies and dances. (I hear there are 7,000 more in storage.) 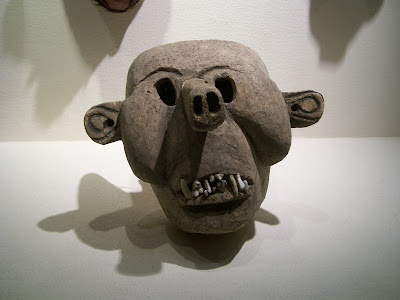 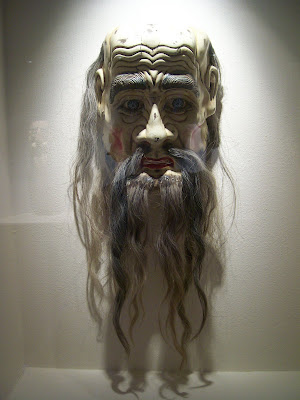 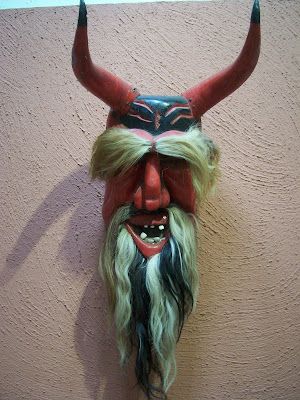 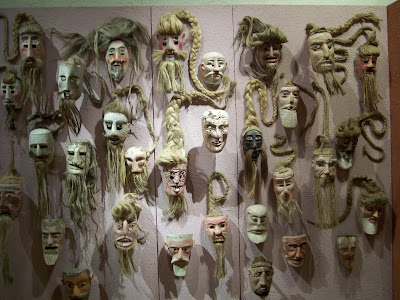 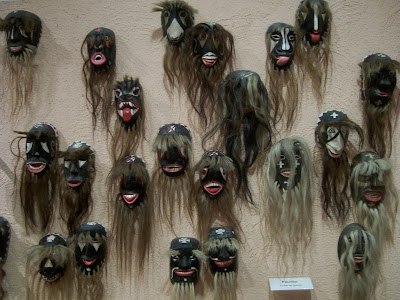 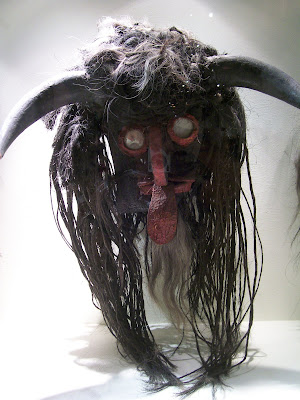 Another highlight of our trip was a ride on the Teleferico from one hillside to the top of La Bufa - the hill on the other side of town.
Ellen and I had to make a decision - the mine tour or the teleferico that crosses high above the city. I have claustrophobia and she has a fear of heights. I offered to wait while she did the mine tour, but she decided that she could handle the ride through the sky.
As we crowded onto the big car, I mentioned to the "driver" that she was afraid of heights. He immediately began a conversation with her that, with language and accent difficulties, took all of her concentration to keep up. Almost before she even realized that we had left, we arrived on the other side. She had a pleasant conversation and I saw wonderful views of the city.﻿ 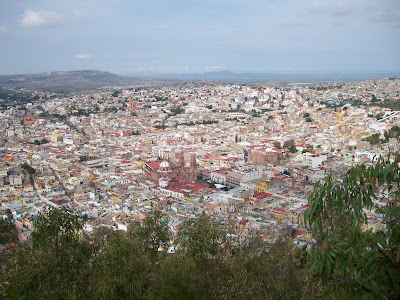 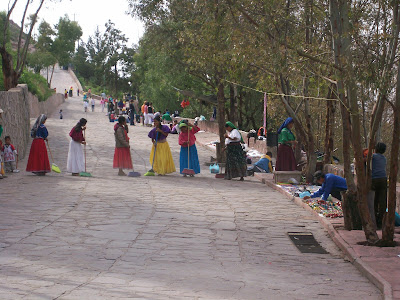 We still had a short walk up the hill to get to the monuments and museum at the top of La Bufa. It was still fairly early, and the Huichol Indians were preparing to sell their goods on the side of the path.
It was interesting to see the women line up and sweep the entire width of the road at the same time. That should help keep the dust off of their merchandise. 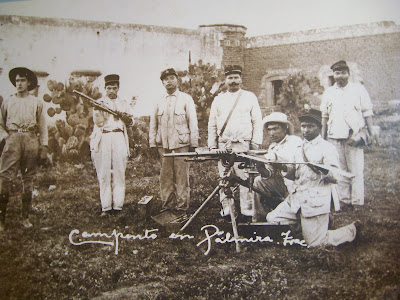 Back in 1914, during the Mexican Revolution, the government had control of Zacatecas with 12,000 troops. Pancho Villa rode into town with a much smaller group and was able to outsmart the unsuspecting government forces.
The people of Zacatecas were very happy and have commemorated the event with a museum on top of La Bufa.
Revolutionary heroes are venerated all over Mexico, and the children just love to dress up and pretend they were part of it. 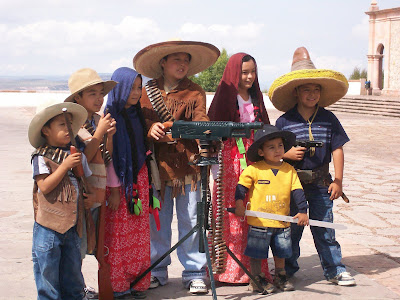 Ellen and I had a wonderful trip, but, more important, she learned that it really is possible to explore Mexico with very little knowledge of the language. Although I get much more out of it because I can understand what is going on around me, the Mexican people are really very patient with anyone who tries to communicate. and there is often someone around who can help.

Posted by Kathy Sterndahl at 2:18 PM