Travel Tales: Only in Mexico 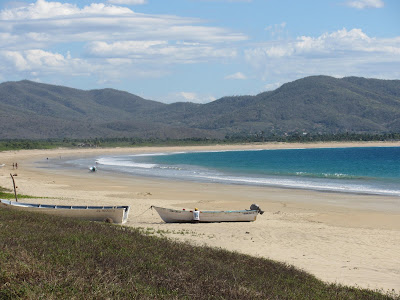 I'm sure you've noticed that I haven't posted here since the end of 2012. Let's just say that 2013 hasn't started out very well for me. We went two weeks without internet at the beach. I kept up with email by walking to a local bar each morning with my iPod Touch and using their wi-fi. After many calls to our provider, they finally decided the problem was in our modem and gave us a new one.

We celebrated the next day by taking a couple of friends on a drive about 50 miles up the coast to explore a bay that we had glimpsed from the highway but had never visited. 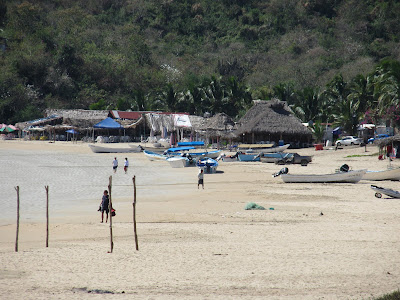 We discovered that Bahia de Chemela is a beautiful big bay with wide white-sand beaches, turquoise water, gentle waves and lots of islands. We saw what may have been a resort at the southern end of the beach, but other than that the only civilization was the fishing village of Perula on the north end. This tiny town is about two blocks deep and four or five blocks long, with palapa-roofed restaurants along much of the beach.

The fishermen must go in and out with the tides because the boats were pulled up a long way away from the water. 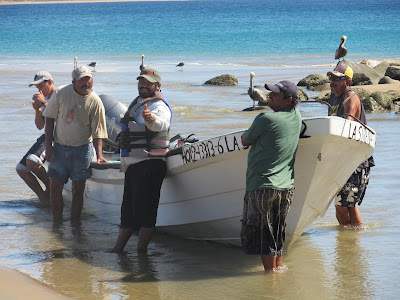 At the north end of town, an amazingly clear small river flowed into the ocean. Many more boats were tied up on the sides of the river, but we were there at low tide.  We sat down at a table at a restaurant next to the river and watched as a couple more boats were trying to come in.

You can see in the photo just how shallow the water was - and those pangas are really heavy. Fortunately, the fine sand was packed hard so one of the guys brought a pick-up truck to the boat so they could unload all the heavy stuff before continuing to where the river got deeper. 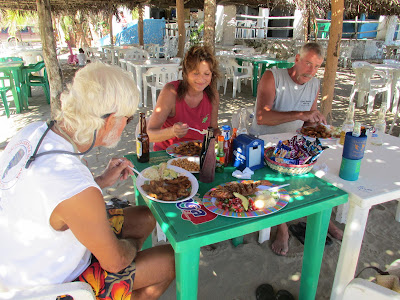 We sat in the shade with our bare feet in the sand and a gentle breeze blowing off the water while we ate a leisurely lunch. Of course, this was not a gluten-free vegetarian restaurant, but I got by with fresh red snapper.

After lunch we explored a bit as we drove through town. It would be a perfect place to go if you wanted to get away from everything. A fisherman told me that there were a few Canadians staying in town, and maybe some Americans on the few sailboats anchored in the bay. Someone was putting in a small trailer park, though, so I guess village life is about to change. 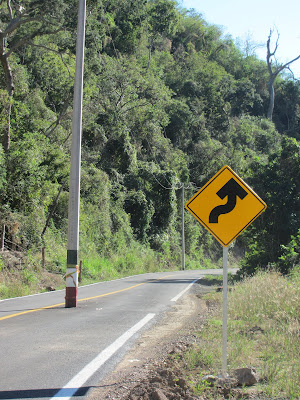 As we drove north to get to Chemela, we passed a newly paved road that lead to a town called Arroyo Seco and the beach. We decided to explore the road on our way back south.

We hadn't traveled far from the highway when we were surprised to see a cement electric/telephone pole is the middle of the road. We weren't sure if the yellow sign was warning us that we had to drive off the road to get around the pole or was warning us of the curve ahead. 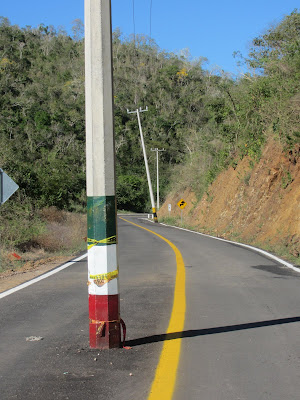 Now this was pretty weird, but as we continued on, we discovered that there were many more similar poles in the road.  One pole was leaning out precariously over the road. Was it falling or did they put it in that way? 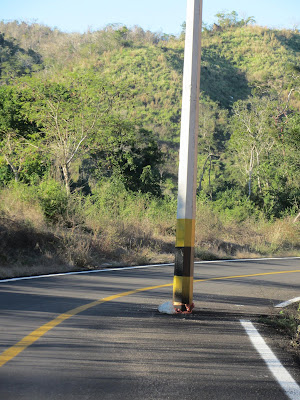 The poles have 2011 stamped into the cement, so they haven't been there very long. But there was no sign of another road bed, so they must have been installed in the middle of an existing road and then that road was re-paved and re-striped. 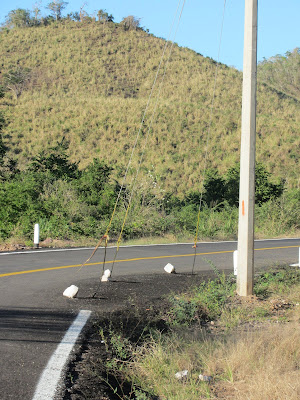 We also saw poles with guy wires that extended into the middle of the lane. These wires were marked only with rocks that were painted white.

I imagine that a car would just drive right up that first wire until it tipped over on its side. We saw others that were similar but had one or two of the guy wires broken.

This crazy winding road actually did lead to a small village - with a surf shop, no less - and two different beaches.

So we had a fun day and a very interesting trip. One day we hope to go back in the boat and fish around the islands. It would be a great place to camp on one of the island beaches.

The next night, however, we all got food poisoning within a few hours of each other. Terry and I spent the entire night trading places in the bathroom. Then I passed out and Terry came running when he heard my head hit the tile floor. We were pretty much over the food poisoning after about 24 hours, but I'm pretty sure I had a concussion. It took about four more days before I was back to normal, and I still have a tender spot on my forehead two weeks later.

I'd like to say that all the bad stuff is out of the way now and the rest of the year will be great. However, I wrote this post out this morning and published it - and even shared it on Google+. Then I watched helplessly as it disappeared. I took a deep, calming breath, shut my laptop and went into the kitchen and had some lunch. Then I went back to the computer and started over.

Posted by Kathy Sterndahl at 2:11 PM