I live in the largest community of American citizens outside of the United States. This "community" comprises Americans living in Guadalajara, about 30 minutes north of the lake, and in any of the many small communities on the shores of Lake Chapala, the largest natural lake in Mexico. I guess I'm cheating to call this a Travel Tale, but it would be travel to almost all of my readers, so I'm going to go ahead and cheat. 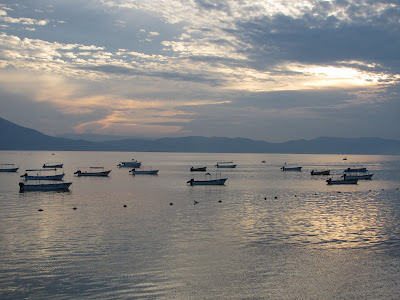 What Draws Us Here?

The weather is probably the number one attraction. While coastal Mexico can be miserably hot and humid in the summer, our 5,000+ foot elevation protects us from that. Our daily average highs are in the mid-70s to mid-80s, while the lows tend to be in the mid-50s to the mid-60s. It is coldest around the end of January, and we all think we are freezing when it gets down into those 50-60 degree days. The hottest month is May when highs average around 87, although it does very occasionally top 100. But we always have a breeze blowing off the lake, so it is almost always very comfortable in the shade.
Our average rainfall is 39 inches, and almost all of that falls in the rainy season between June 15 and the end of September. Even during the rainy season, most of the day is perfect. The majority of the rain comes in the form of hard and furious thunderstorms, usually at night. It is rarely a surprise because we can watch the storms moving across the lake during the day. Nighttime storms entertain us with house-shaking thunder and brilliant flashes of lightning.

The Villages on the North Shore of Lake Chapala 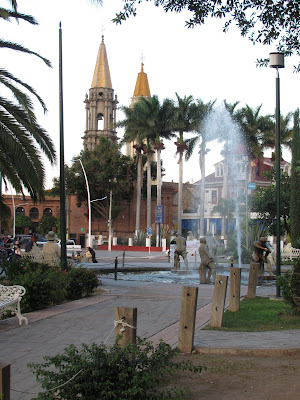 Chapala is the largest town and also the municipality (county) seat of the primary area where the gringos have settled. The city has a population of about 22,000; the municipality has about 45,000. Heading west on the only road around the lake, you drive through San Antonio Tlayacapan (about 5,000 pop.) and Ajijic (around 10,000). The next county includes San Juan Cosala (about 5,000) and Jocotepec (10,000?).  All of these communities have fairly large populations of Americans and Canadians, but the vast majority is still Mexicans. There are also smaller villages in between and on the south shore of the lake.
Each village has its own personality. For instance, Ajijic, 5 km west of Chapala, seems to me as if it is all art galleries, restaurants, and real estate offices. It also has the highest property prices. I started out living there. I still think it is fun to visit, but it is not where I chose to live. 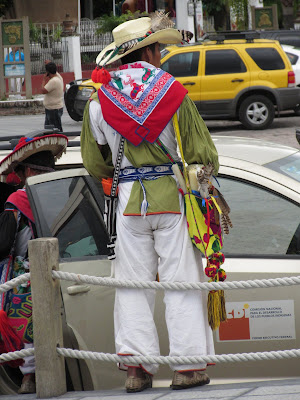 San Juan Cosala is more 'pueblo Mexico' with many less-educated indigenous families and lots of children. Most of the gringos living there are in a hillside subdivision outside of the village.
Chapala is probably the closest to a small town in the US, although still very different. It has more stores - the majority mom and pop-type; more roads paved with asphalt or brick rather than rocks (quaintly referred to as cobblestones); and a large city park. We also have the largest American Legion post in Mexico.
But no matter how many Americans and Canadians live here, there is never any doubt that this is Mexico. Many of the businesses have someone who speaks english, but the majority of the locals speak only Spanish, or Spanish and some indigenous language. It is not unusual to see Huichol or Purepecha Indians in traditional dress making and selling their traditional crafts. Cars and trucks with huge loudspeakers drive by daily selling various necessary products or offering to buy junk that can be hard to dispose of. (That is annoying at first, but you soon learn to tune it out.)

What Do We Do All Day?

The main thing that made me choose this area of Mexico is the library at the Lake Chapala Society (LCS) in Ajijic. I have been an avid reader since 1st grade; I can't imagine a life without books. Actually, I can, but it is not a life I would want to live.
When I moved here eight years ago, LCS had the only library in town. It is still the largest. LCS is a great place to meet people. They have a wonderful garden to hang out in and offer classes from art to Spanish to yoga. They have thousands of members, but they tend to be the older of us immigrants. 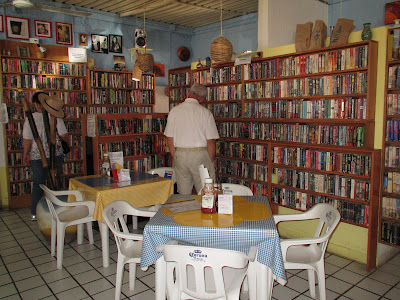 These days, we can find books all over the place. The American Legion has a library, many restaurants have book exchanges (the one pictured here is by far the best), and thrift stores sell donated books. And, of course, Kindles and Nooks are very popular down here.
When I first moved here, I got a few quilters together and we formed the Ajijic Quilt Guild. But there are other groups for people with just about any interest that you can think of: theather - acting, costumes, set-building; teaching English to local Mexicans; fraternal organizations - Masons, Shriners, etc.; and orphanages and various charities.

Calories In and Calories Out

For those who choose to hang onto American eating habits, we have a few stores that carry lots of imports, sometimes at hefty prices. Or you can drive to Costco in Guadalajara. Or you can use a service that orders from Costco and then delivers right to your house. Even Walmart, right here at the lake, carries more and more imported items every day.
We can buy fresh produce, dairy items, seafood, and breads at the tianguis - street markets that set up once a week in every town. Chapala also has a great mercado on the plaza that sells all that and more every day.
We have an amazing variety of restaurants, mostly in Ajijic, in addition to the usual Mexican offerings: Argentinian, burgers and fries, Chinese, German, Indian, Italian, Japanese, Pizza, Seafood, Spanish, Taco stands, Tapas,  Tex-Mex and Thai. And lots of ice cream stores - even some gelato places owned by a family from Verona. 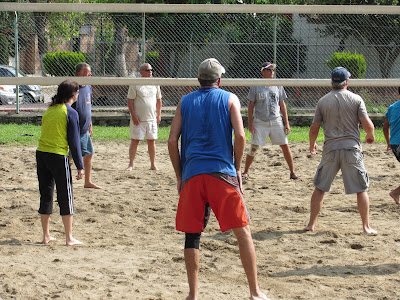 As easy as it is to take in the calories, it's important that we find fun ways to work them back off. The park near my house has beach (well, sand) volleyball five mornings a week and tennis and basketball available daily. They also have a large swimming pool and are building a second soccer field.
There are gyms in most of the towns and two golf courses. There are groups that hike in the mountains behind the towns. San Juan Cosala has a "park" of hot springs and pools. And many of the bars offer dance classes to learn salsa or western dance.

We have two movie theaters that together show about 6-8 movies at a time, about half of them in English. The movies often open here about the same time as in the US.
Many of the restaurants having bands and dancing.
Each town has its own malecon, or lakeside park where everyone goes to hang out, especially on the weekends. Most of them even have free wi-fi. Chapala's malecon can get pretty crazy on weekends because of all the people who drive out from Guadalajara. Extended families gather for picnics and to play in the water. Mariachi bands wander around playing for tips. Open-air waterfront restaurants often employ bands that can be enjoyed by customers inside and anyone else outside. Panga boats line up to take people for rides along the shore or out to Scorpion Island.
Ajijic has lots of art galleries for those who want to spend money. Or we can drive in to Guadalajara to the big malls or to the neighboring towns of Tonala and Tlacquepacque for traditional crafts.

It's Home to Me

I've lived here for a little more than eight years now. It is home to me. Trips back to the US cause a bit of culture shock. I have fun shopping and visiting friends and relatives, but I don't feel like I belong there anymore. 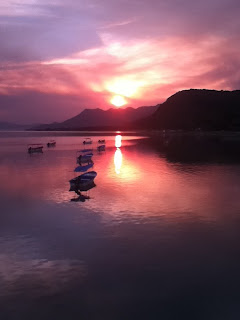 I live in a quiet neighborhood and most of my neighbors are Mexican. My Spanish is pretty good so I have no trouble fitting in. I love that I can walk out my front gate and walk two blocks to the malecon or the park. The plaza and its mercado is four blocks in the other direction. I walk there almost daily for my fresh produce. If I feel the need for a dose of America, I can go next door to the American Legion, but that doesn't really happen very often.
Most evenings, I walk along the malecon to enjoy the sunset and the end of the day. Most of the people are packing up to head home. A few mariachis are still playing, hoping for one last tip. If I time it right, I can stop for a gelato on my way home. If I am alone, I'm sure to be back home before dark, just as I would if I were out walking in the states.
Thanks for reading!

Posted by Kathy Sterndahl at 10:04 PM