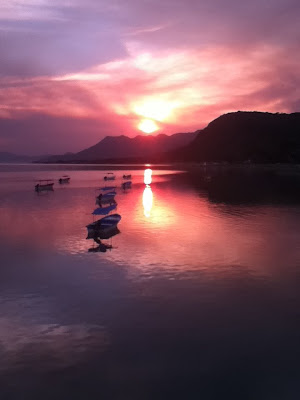 Beautiful sunset, right? But those clouds in that sunset are really smoke from a huge forest fire about 45 minutes from my house. One thing about traveling is that you never know what might happen along the way.
You might meet a local or a fellow traveler who tells you about a special place or event that sounds so good that you decide to change your plans.

After leaving Osaka I learned that they were holding a special exhibition of textiles from around the world. I got back on the train and returned in time to see what was probably the very best part of my six month trip.
Other times, it might be something that really messes up your plans - like if you were planning on backpacking through Guadalajara's Primavera forest a couple weeks ago.
Fortunately, I believe in keeping my plans very loose, because that trip to Japan went through some pretty radical changes along the way.
Retirement Plans, Expanded Version
I knew years in advance that I was going to move to Mexico when I retired, but I decided that I would first visit Japan to see first-hand the quilting techniques and designs that I had been teaching for about eight years.
Then I read Tales of a Female Nomad by Rita Golden Gelman. She had spent time in Mexico, the Galapagos Islands, Borneo, and Bali and it made me think of the possibilities out there for me. Rita and I exchanged mails and, with her encouragement, I came up with a plan for a year-long trip around much of Asia, including longer stays in Japan, Bali, and Thailand and shorter stops in Korea, Shanghai, Taiwan, the Philippines, Java, Sumatra, Singapore and the rest of Malaysia, Cambodia, Vietnam, and Hong Kong.
It turned out that Rita was going to be in Seattle at the same time as I was and we managed to get together for part of a day just before I left on my monumental trip. She had stories to tell about her travels and share some information that wasn't in her book. By the time we parted, we were both psyched about what I had planned.
I bought a ticket to Japan with a return one year later. Everything else, I planned to buy as I decided exactly when and where I'd go next.
First Stop - Japan
Two days after my arrival in Kyoto, I received an email from my sister-in-law telling me that the US had just closed it's embassy in Jakarta and had issued a warning to American citizens traveling in that area. I promised that I wouldn't go anywhere dangerous. Maybe I'd have to fly from Bali to Singapore rather than traveling overland.
Watching the online news carefully, I learned that there had been some recent problems in the Philippines with tourists being kidnapped. I told myself that I wouldn't go to that part of the Philippines and continued enjoying my travels around Japan.
On October 16, I received another email from Susanne. This time it was about the bombs going off in the nightclub in Bali. It was obvious that the tourists were the target. This brought things a little closer to home.
Within a few days, it became obvious that the perpetrators were Muslims and they were not happy with Americans. This scared me. What kind of defense is there against someone who hates you because of where you are from? My mind kept flashing with vague memories about Sukarno and Suharto and uprisings and killings.
The Changes Begin

Because I was interested in the Buddhist religion in these areas I was planning to visit, I never noticed that there were so many Muslims there, too. I finally decided to skip the Philippines and Indonesia and spend more time in Japan and Thailand.

By the 18th of October, I had learned that southern Thailand also has lots of Muslims. I certainly have nothing against Muslim people in general, but the world had been getting a bit crazy since September 11 of the previous year. It now seemed like a good idea to check into the possibility of teaching English in Japan. I could go to northern Thailand for a month or so and return to Japan for the start of the semester.

On October 25, the Danish President of the European Union announced that they feared Thailand would be the next target for terrorist attack. By then I was about ready to change my ticket and crawl back to the US with my tail between my legs, but I still felt very safe in Japan. I would wait and watch before deciding anything.

Holding on to a Bit of It

When nothing had happened a month later, and I needed to leave Japan for a week or so to re-enter with a new visa, I decided to go ahead and fly to Thailand and stay in the northern Buddhist area. I was giving up so much of what I had planned and I wanted so much to hang on to that one little bit.

After an initial nervousness, I some got over it and had a great time in Chiang Mai and Chiang Rai for ten days. It was much less than I had planned but I was enjoying Japan so much that I wasn't too disappointed. Maybe I could go back another time when things were more settled.

Back in Japan, I moved into a small apartment in Osaka and settled in to wait for the box of clothing my mother was sending me. I needed to dress more professionally to work. When the semester starting date passed and I still had no clothes, I talked to my mother again. She had sent my box via ship because she thought airmail was too expensive. (It was my money she thought she needed to save.)

As I talked to her, I began to realize that something was not quite right. I knew she was having some health problems but nothing she shouldn't have been able to handle. It seemed like she was holding something back. The more we talked, the more I knew that I had to go back to the states and find out for myself what was going on.

I had another 60 days left on my visa and I decided to finish that time out before leaving. Fortunately, I had a ticket that was easy to change, but I was so happy that I had not purchased the tickets or made reservations for all of my planned travels. I enjoyed my final six weeks in my apartment in Osaka, but I was disappointed that I had to leave before the cherries bloomed.

Since that trip, I've learned to travel with the least amount of preplanning and reservations possible. I book my airline tickets and a room for the first and last nights. After that, I go wherever the trail leads me.
Posted by Kathy Sterndahl at 9:07 PM