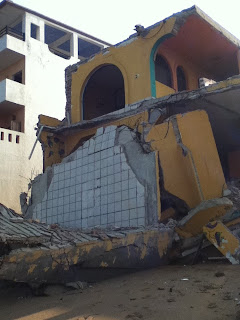 After Hurricane Jova
This morning I took a walk along the beach in Barra de Navidad. It gave me a different view of the destruction caused by the hurricane that hit last October. All of the usual access routes between the beach and the road above were blocked by construction, but I wasn't worried because I could see a set of stairs up ahead. I had been walking for quite a while and could see that the tide was going out. No Problem.

Suddenly, some especially large waves came along that forced me up against the seawall. Getting my clothes wet was no big deal, but I had some electronic stuff that I really did not want ruined. When the fourth one came up to my knees, I realized that I had to get out of there. I looked ahead and could see that the waves were much worse in that direction. To go back the way I had come, I had to walk out around a wrecked building - to much lower ground.

I took the only reasonable choice available - I climbed the broken wall next to me to the restaurant above and, with all the dignity I could muster, walked through the restaurant to the exit and the street beyond.

OK, so this was a tiny crisis. I've been through much worse. Twenty-seven years ago, my youngest daughter was diagnosed with leukemia shortly after her third birthday. I was beside her through every minute of treatments, hospitals, relapse and, eventually, cure. Sure, it was hard, but it was much harder on her. I was always perplexed when people commented on my strength. I heard often, "I don't know how you can do it."

That always seemed crazy to me. First, she was the one going through the horrible stuff. I was just there to love and support her. And how could I not do it? I had no choice. I did what I had to do to deal with the problem so we could get on with our lives - the same thing I've done through all the sh** that's happened to me along this path of my life.

Bad stuff happens to all of us. It's part of life. It could be a hurricane in Mexico, tornadoes in Kentucky, an accident, an illness or death in the family. No one makes it through life unscathed. We can sit there crying about it, or try to drown our problems in booze or drugs, or we can do whatever has to be done to go on with life.

My Mexican neighbors rolled up their sleeves and figured out their options for getting back into business. Some only had to dig out the mud and get out scrub brushes, others reopened businesses with only half a building, some have to knock it all down and start from scratch. The same as the people of Japan have done and the ones in Kentucky will do. Feeling sorry for yourself is a waste of time. Besides, look around you - there is always someone who has much worse problems. So get over it!

Posted by Kathy Sterndahl at 12:30 PM

Email ThisBlogThis!Share to TwitterShare to FacebookShare to Pinterest
Labels: dealing with problems